I am so proud to officially join the Advisory Board for Charity Bomb after being a catalyst and unofficial advisor since the inception of the charity. Thank you Matthew Leone, Nathan Leone, Nik Frost and the rest of the team for being steadfast in vision and transparency.  – Rynda Laurel

Charity Bomb is an unconventional, disruptive charitable organization that marries passion, innovation and hard work to fundraise and producing custom benefit events for a variety of causes and charities.

One of the key events Charity Bomb created is Strange 80’s which is a benefit show that features a rotating cast of the biggest marquises talent and emerging artists in rock, performing songs from the world’s favorite decade, the 80s. Strange incorporates musicians, comedians and cast members from the latest binge-worthy series in pop-culture. Most importantly, 100% of the proceeds raised in LA will go to Give an Hour in partnership with 320 Changes Direction.

VRY everyday was also a proud sponsor of Strange 80’s 3D in Los Angeles on June 1st. VRYeveryday participated as a sponsor, had an information table, a VIP activation and donated to the gift bags. In addition all purchases of VRY product during the show and online with a special Charity Bomb code gives a percentage back to the designated Charity for this event.

Check out some of the fun footage here:  Rynda IG 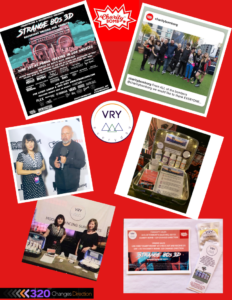