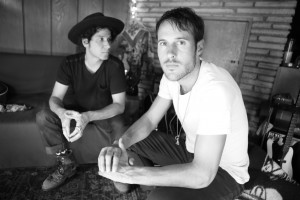 Christopher and Davie met randomly at a radio station in 2008 and immediately struck up a friendship.  A few years later Christopher produced multiple songs for Voxhaul Broadcast at his studio in Silver Lake, including “You Are The Wilderness” which was featured on The Walking Dead soundtrack. No stranger behind the board, Thorn has produced albums for Anna Nalick (Wreck of The Day is certified gold) American Minor, Under The Influence of Giants (featuring Aaron Bruno), Chuck Ragan and Gateway Drugs to name a few.  “I felt lucky to be able to work with Voxhaul Broadcast.” says Thorn, “I thought Davie was one of the best singer-songwriters in Los Angeles.”

Thorn went on to co-produce Awolnation’s ubiquitous hit “Sail” and toured with them on guitar. In between their respective projects, Thorn and Dennis would hang out and listen to music together for hours. Eventually this turned into writing songs together and then late night recording sessions with friends. When Thorn left Awolnation and Voxhaul Broadcast disbanded the two decided it was time to work together and the duo, now called Sonny Boy Thorn, became a priority.

With just a few live shows under their belt, the buzz is starting to build with fans, radio, and press. Coverage from Kevin Bronson’s Buzzbands LA and spins on Kat Corbett’s Locals Only on KROQ are just the beginning.

And the Dave Grohl connection? Watch this: CT performs with B!tch and Dave Grohl.

LISTEN: 4 songs up now at www.sonnyboythorn.com

LIVE: Sonny Boy Thorn  Monday night residency during the month of July at The Satellite in Silver Lake.
_______

“Sonny Boy Thorn makes festival-ready classic rock with big grooves and modern influences — and just enough of the latter that the band doesn’t sound like it’s aping anybody from the ’90s or before.” ~Kevin Bronson Buzzbands LA
_______

“Two friends who have found a creative and musical kinship where the music has a timely, as well as timeless, quality to it. “Wild and Free” embraces some of the most natural rhythms and guitar tones, spreads it’s wings in the spirit of an uninhibited existence and (along with Dennis’ always soulful and impassioned voice) aims to liberate the heart and soul just a little, one chord at a time.” ~High Voltage Magazine